“Baz has given me back structure, routine, and a sense of purpose again and most importantly; unconditional love and companionship”.

In mid-August 2021 I was fortunate to be gifted Barak (aka Baz), a re-purposed Guide Dog, through Integra Service Dogs Australia – he has completely changed my world.  I no longer dread shopping as people seem more tolerant, allowing me space and understanding that I’m a bit slow.  I am also less self-conscious, knowing people aren’t looking at me, but rather the handsome Baz by my side. 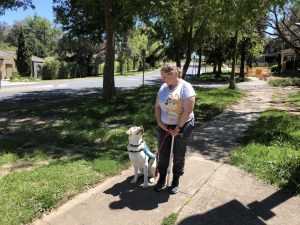 I will medically retire from the Army in November, after 24 years of service. My time with the Army has been ultimately rewarding, though also at times both dynamic and demanding; it has taken a physical and mental toll on my health.

When I met Baz he quickly decided I was his human and he became my permanent shadow. He seems to appreciate where my head is at, and he understands my physical limitations.  Baz rapidly adjusted to walking on my right side and instinctively leans into me providing support when I am unstable. He eagerly picks things up when I drop them and my ‘take your medications’ alarm cannot be ignored.

It took a few weeks for Baz’s ‘goofy’ side to really come out – from his hilarious whippet-like zoomies around the yard to our mutual love of music. I only need to get my violin case out for Baz to get his all over body wiggles of excitement. Baz will howl along in delight with tail madly wagging as I play.  (Together we are working on a less vocal display of his appreciation – without him losing that spark!).

Leaving the Army is more than just taking off the uniform – it’s a complete loss of identity, purpose and even ‘mateship’; no longer belong in that world anymore. Just having Baz there, my someone, who doesn’t judge me or care if it’s a good day or bad, – it is so valuable. Baz has given me back structure, routine, and a sense of purpose again and most importantly; unconditional love and companionship.