Commander achieves milestone with a little help from a friend 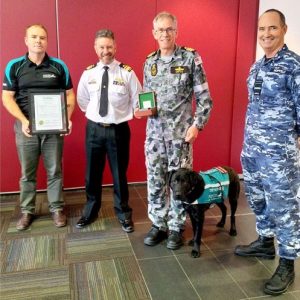 Despite a number of personal and professional challenges, Commander Ian Davies persevered and recently achieved the prestigious milestone of 40 years Navy service.

The true guests of honour, however, were three of the most important females in the Maritime Logistics officer’s life and a source constant support; wife Catherine, daughter Michelle, and two year old Labrador assistance dog Ebony.

“Catherine had seen a decline in my mental health since 1999 following a major incident and has seen a decline after each operational deployment since,” CMDR Davies said.

“She approached Soldier On in April to enquire about assistance for me and support for herself.”

Following the call, Soldier On connected the family with Integra Service Dogs and Ebony was sourced from Guide Dogs Victoria.

“Ebony had a medical issue when she was a pup and did not fit the mould as a guide dog but was deemed highly suitable as an assistance dog,” CMDR Davies said.

“She has become my best friend and constant companion, second only to my wife Catherine.”

“Even when she’s un-dressed she follows me around the house and is always by my side,” CMDR Davies said.

“I have also had great support from my workplace in the J5 Branch, and importantly Ebony not only lifts my spirits, but also the entire team when she is in the building.”

Ebony was purchased with the assistance of the RAN’s Keeping Watch, a charity chaired by RADM Laver.

“The charity provides assistance to serving members of the Navy and their families who are suffering financial hardship,” RADM Laver said.

“We’re here to assist members in a timely and compassionate manner and it’s very satisfying to see such a great result with Ebony and the Davies family.”

CMDR Davies joined the RAN in 1978 with a long career spanning personnel and supply officer postings; training and staff positions and deployments to Baghdad, Bahrain, Sudan and Afghanistan.

“I was told very early on in my career that there is no such thing as a bad job, just some jobs are better than others,” he said.

“My career has provided a variety of adventures that the average Australian would never experience. I have loved every year of service and it’s an honour to reflect on that today with my family, friends and Ebony.” 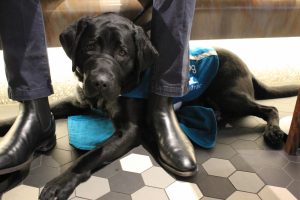