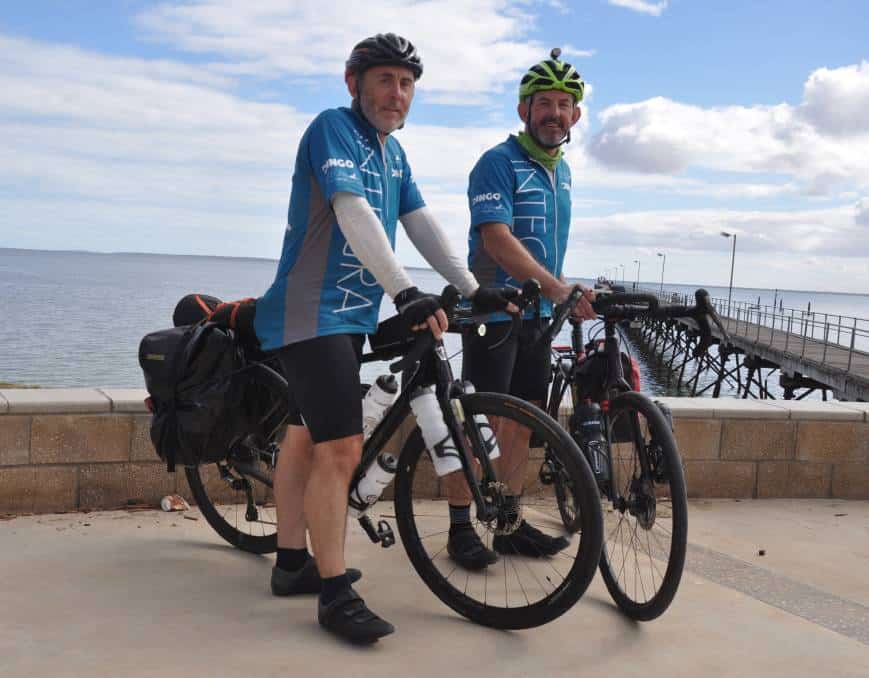 JOURNEY: Ian and Brian Schumacher during their stop in Ceduna as part of the Integra Ride from Fremantle to Sydney to raise money for Integra Service Dogs Australia. Photo: Luca Cetta

Brian and Ian Schumacher are in the midst of a cross-country adventure as they cycle from Fremantle to Sydney to raise money for Integra Service Dogs Australia.

The brothers, who started their journey in Western Australia on April 1, arrived in Ceduna on Wednesday as part of the Integra Ride east.

The principal of Adelaide’s Rostrevor College for the past three years, Brian Schumacher is also using the ride through Eyre Peninsula to catch up with families who have sons boarding at the school.

The brothers also lost a sister to suicide in 1997 after a battle with mental illness and have a passion for supporting mental health initiatives.

“This coast-to-coast ride is a good opportunity to support an organisation which is doing wonderful work for veterans and first responders who have served Australia with distinction and are now suffering from PTSD,” he said.

“This is our way of saying thank you for your service.

“The impact of providing vulnerable people with a support dog that gives them renewed purpose, greater confidence and unconditional support is life changing – and it saves lives.”

Mr Schumacher said after researching Integra and meeting with the organisation, the brothers had no hesitation in wanting to support them.

He said they started planning this ride after the 2019-20 summer bushfires and reading of an expected rise in PTSD in firefighters and other first responders.

The brothers are aiming to raise $200,000 for Integra, and have reached $78,000 through corporate and community sponsorship.

Ian Schumacher said it cost $30,000 to train, match and place an Integra dog with a veteran or first responder suffering from PTSD, and that they were “highly sophisticated” dogs.

Brian led Rostrevor College from 2018 to 2020, and is currently the regional director for Edmund Rice Education Australia, which provides support and guidance to principals from colleges in South Australia, Western Australia and Northern Territory.

While travelling through Eyre Peninsula, with further stops at Streaky Bay, Wudinna and Kimba after Ceduna, Mr Schumacher said he wanted to catch-up with families of Rostrevor College boarders throughout the region, from Ceduna, Streaky Bay, Wirrulla, Wudinna, Cleve and Port Lincoln.

He said there was camaraderie between the school’s Eyre Peninsula boarders.

“I like the way the Eyre Peninsula guys in the boarding house look after each other,” he said.

The brothers said they enjoyed crossing the Nullarbor for the first time, and the social aspect to come from the journey.

“We enjoy riding and the physical challenge of it, but also the social side of the ride,” Brian Schumacher said.

“We have seen a lot of people travelling in caravans and we get to hear their stories,” Ian Schumacher added.

“People make conversation and it is good to talk to them.”

To support the Schumacher brothers on their ride, you can donate at Integra Service Dogs Australia. All proceeds of the ride go to the charity.