He has become a solid part of his Handler’s family unit. His Handler can’t imagine life without him.

–Vinnie and his Integra Handler–

In late 2019, after a long service history with the Navy, Vinnie’s Handler was medically discharged. This turned Vinnie Handler’s life upside down.  A complex diagnosis of PTSD had left them with symptoms such as anxiety, depression, and disturbed sleep.  Vinnie’s Handler reached out to Integra Service Dogs Australia to discuss the Integra program and what it could do to support him. 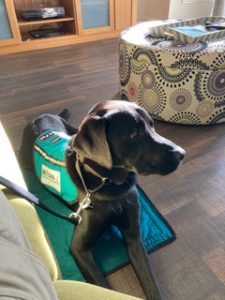 In February 2020, Vinnie was introduced to his new Handler’s home:  Vinnie arrived as a tall, black Labrador loaded with affection and care. From the first day of Vinnie’s arrival, his Handler’s life began to change for the better.

Unfortunately, due to COVID-19 lockdowns training has been limited in 2021. However, Vinnie being as intelligent as he is, and with his prior training with Guide Dogs Victoria, he was in his element. Vinnie would sense his Handler’s anxiety and sit with his back to his Handler as if standing guard, whilst putting gentle pressure against his Handler’s leg. Vinnie wakes his Handler up from disturbed sleep. Vinnie behaves as an ally, a loyal friend. Vinnie has such a calming effect on his Handler every day.

Outside of his formal work and training duties, Vinnie has a huge happy puppy personality. The house will be quiet, then from nowhere, his Labrador head will appear for a moment from behind the couch, as he does his trademark Springbok pounce onto his tennis ball.

Vinnie is patient, gentle and ever attentive. He has become a solid part of his Handler’s family unit. His Handler can’t imagine life without him.  Thank you, Guide Dogs Victoria, for the life-changing support you provide in working with Integra. 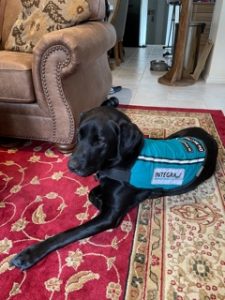